Dear all,Happy New Year!!It's been a while since we last wrote to you all but we now have very important news to share. We have received the summary report of the consultation for the Joint Central Eastern Berkshire Waste and Mineral Plan. Some of you would have attended one of the consultation sessions held in Knowl Hill last year.We are pleased to report that Star Works is now not considered as a suitable site to be included in the Waste & Mineral plan and other sites should instead be sought. This conclusion could not have materialised without your backing and responses to the consultation document.The report provides an overview of the general themes of the key issues raised by the responses and comments received to the draft plan consultation. In total 348 responses were received from residents/organisations in relation to the consultation, with Knowl Hill, Star Works receiving more responses than any other site included within the plan. The Consultation Summary is an extensive document but we would urge you all to take the time to read it in full as there are many references to Star Works and our community's response. However in the meantime below is a brief summary of a couple of the key relevant points: 3.56 The most contentious issues under this policy proposal were in regard to the proposed site allocation of Star Works at Knowl Hill. A large number of the concerns related to the pollution, noise, pests, health and safety and vehicles movements generated as a result of the Star Works Site and the continued (negative) effect it could have on the local community should the site continue to operate. Responses stated that due to the aforementioned issues, the allocation of Star Works was contrary to policy W1 as it was not sustainable, though the principles of Policy W1 themselves were supported. 3.59 A selection of the proposed changes to Policy W1 are as follows: - Removal of Star Works as proposed site allocation, an alternative location sought. -The draft plan states the Central and Eastern Berkshire Authorities will plan to provide for new waste management facilities. -Waste should not be buried - there is a need for more incineration and recycling facilities. Amongst many graphs within the plan we thought you would be most interested in the following, showing the levels of response to all waste site allocations within the plan: 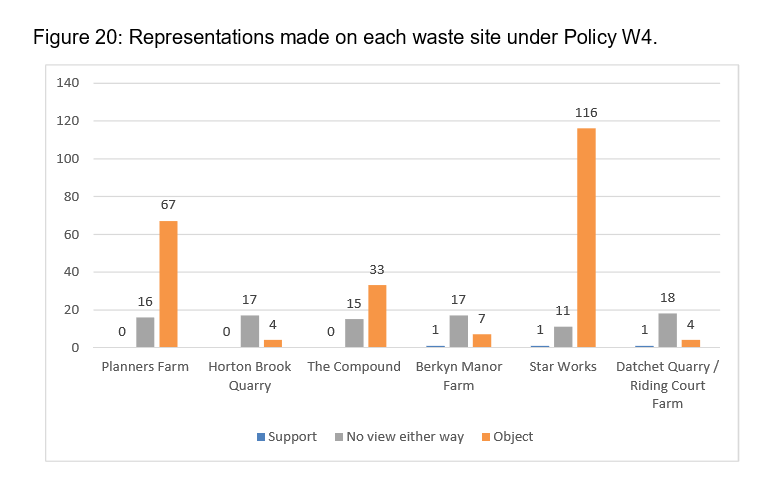 Muckmentum have been working extremely hard but we certainly could not have done this without all of your help and support but we would like to give special thanks to Councillor Maureen Hunt who for many years has been unwavering in supporting and representing us alongside resident's views to RBWM and always being on hand with historical & relevant information which has been invaluable .Thanks also go to Councillor John Halsall (Wokingham Borough Council) for again representing our views which is very much appreciated.There are so many people to thank but we would like to give a big shout out to the wider Muckmentum team who have and continue to represent us on this issue. We know that many residents still suffer daily from residing near to the Star Works site and are aware that this is not the end of Star Works being used as an ongoing site. However the repercussions for the wider community should Star Works have been included as a preferred supplier on the Waste & Mineral plan would have been irreversibly detrimental to our village and day to day lives.Therefore we will be keeping a firm eye on any future proposals/changes to developments or policies associated to the Star Works site.Thank you all and as always please contact us with any questions or thoughts.Best WishesMuckmentum